There's A Waitlist For These P8,600 Thong Jeans

We reported The Great Jeans Apocalypse was officially underway when new designer Thibaut debuted no pants-pants (aka thong jeans) at Tokyo Fashion Week back in October. Understandably, the internet quickly lost its cool over the extremely ripped and deconstructed jeans.

For those who thought the jeans (or lack thereof) were just a runway gimmick, think again: LA-based brand Carmar Denim created their own thong jeans knockoff—and they're already sold-out. Yes, I repeat: a pair of $168 (P8,600) denim seams now has a wait-list of people who want to buy them. 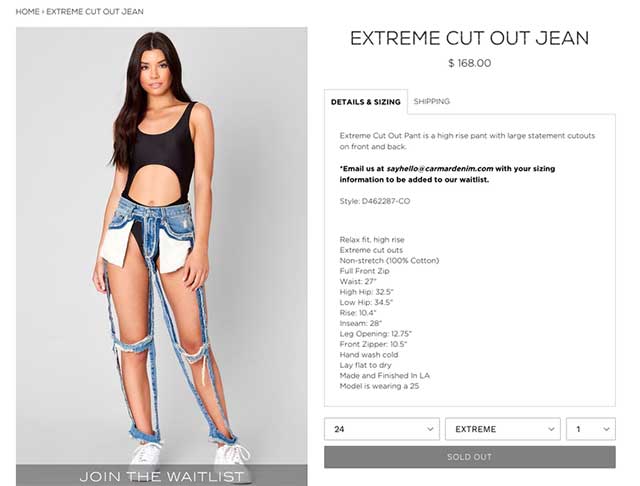 If you're wondering who exactly is buying all these thong jeans and where exactly they're wearing them, you're not alone. But fear not, Carmar has already taken to Instagram to prove the barely-there jeans can be worn totally casually in a multitude of social situations...

Here we have the kid-friendly thong jeans in action at an amusement park...

And, of course, while waiting to be Instagrammed in front of a red wall:

Listen, when it comes to jeans, you do you. But I'd just like to say, it's going to be super awkward when everyone shows up to the apocalypse wearing the same pair of thong jeans. Just a little something to think about.