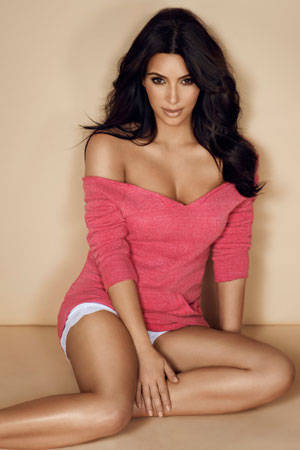 With a reality show keeping up with her life and paparazzi following her 24/7, is there anything else we don't know about our gorgeous cover girl Kim Kardashian? Her claim to fame is her awesome bod and her surname, but there's more than meets the eye to this amazing woman. She's a tough chick with a strong sense of style and keen business savvy. Get to know more about the most famous Kardashian with these fast facts that Cosmo has unearthed just for you!

1. She doesn't drink alcohol. She says, "I can't stand the taste of alcohol... I'm always the designated driver." She elaborated to People Magazine, "I do not drink alcohol at all. My sisters drink, so when they get a little crazy, I am there to pull them down."

2. Kim's first-ever job involved working in a clothing boutique to pay for damages on her first car. She told Maxim that it spurred her lifelong love for fashion and encouraged her to open a boutique with her sisters, called Dash!

3. Kim was actually a stylist and personal shopper. Before becoming a bankable style icon herself, People Magazine reveals that back in 2004, she was hired by stars like Lindsay Lohan and Brandy to glam up their style.

4. She used to hate her figure. Everyone–men and women alike–lusts over Kim's curvy, all-natural body. But, believe it or not, she was very self-conscious during puberty. She told Playboy Magazine, "I used to say my prayers before bed and pray I would stop developing." But now, she's grown into a confident and sexy woman, and we're thankful that God didn't answer that prayer!

5. She believes in Christianity. Kim did pray a lot, especially when she was younger, and used to attend weekly church services with her whole family. Earlier this year, she told CNN that she annually gives 10 percent of her money to a church founded by her mother.

6. She was schoolmates with Paris Hilton. According to Kim's blog, she attended preschool with both Nicole Richie and Paris. They were best friends for a time, but have since reportedly drifted apart.

7. Kim has ventured into music, just like her old BFF Paris! She tried her hand out at recording late last year and released a pop single called "Jam (Turn It Up)." Unfortunately, the club-type track didn't jam too well on the charts.

8. She's smaller than she looks on TV. With her popularity, poise, and confidence, Kim seems to tower over other celebs. But, the Huffington Post reports that physically, she is quite petite (by Hollywood standards, at least), standing 5-foot-2.5. She makes up for her stature with five-inch stilettos and her HUGE star presence.

9. Kim is a modeling coach to her younger sisters Kendall and Kylie. She told Hollywood Life, "They ask us so many questions. We just make sure we are there for them anytime they need something answered...We always go to their shoots and go behind the scenes to see how it's going." Kendall seems to think Kim may have unfulfilled dreams of being a runway model herself; in an episode of Keeping Up With the Kardashians she told the cameras, "I think she's taking her fantasy out on me."

10. Kim's recent wedding to baller Kris Humphries rolled in a lot of cash. According to the New York Post, the upcoming TV special, Kim's Fairytale Wedding: A Kardashian Event, is expected to earn them $15 million! On top of that, the couple hardly spent on the black-tie affair, which was attended by celebrity guests like Lindsay Lohan and Eva Longoria. Practically everything was free, from the champagne and 10-tiered wedding cake, to her wedding dress and two evening gowns, all by couture designer Vera Wang. Talk about a dream wedding!