She's the designer known worldwide for her opulent accessories. Get to know the successful Pinay who makes local and Hollywood stars sparkle.
by CJ de los Santos | May 8, 2012
Post a Comment
Featured 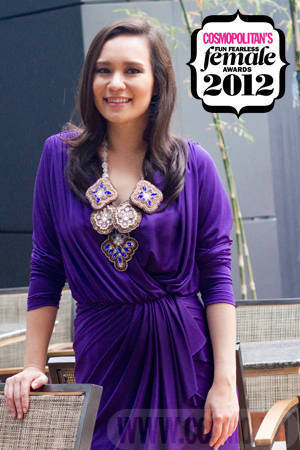 All around the world, women are vying for a gem-encrusted piece by accessories designer Nicole Whisenhunt. The 29-year-old came to prominence when she was featured in prestigious fashion magazines in the US, including Elle, InStyle, and Women's Wear Daily--and the most stylish celebs have taken notice.

We met Nicole at the Ronac Art Center for her Fun, Fearless Female Awards 2012 shoot, where she let us in on her famous clientele. May 2012 cover girl Anne Curtis is reportedly a fan, as well as former cover girls Heart Evangelista and Georgina Wilson. She nabbed Isabelle Daza to star in the lookbook video for her 2011 "Points of View" collection, which was launched in New York. Even Hollywood style icons like Paris Hilton, Khloe Kardashian, and Lucy Hale have designs by Nicole!

Coming from a corporate job, Nicole's venture into fashion was a big risk, but the passion she had for her work was more than enough to earn her accolades. She has sparkled her way into the Filipino and foreign fashion scenes with her exquisite and timeless pieces, and we can't wait to see what else is in store for this topnotch Pinay talent.


Launch the gallery to see behind-the-scenes photos from our shoot with Nicole Whisenhunt!

To see the rest of the Fun, Fearless Female Awardees, grab the May 2012 issue of Cosmopolitan Magazine with ANNE CURTIS on the cover, in stands NOW! Virtually flip through our online teaser of this Collector's Edition!