Your Complete Guide To Birth Control Methods In The Philippines

What they are, where to get them, and how much you'll have to pay for each one.
by Andie Estella | Feb 6, 2017
Post a Comment
Featured

From flavored condoms to fun sex toys, there are so many options to spice up your sex life—but choosing the right birth control method should be at the top of your sexytime list. Safe sex is great sex, people.

Cosmo.ph asked Dr. Rebecca Singson, M.D. about the common birth control options available in the Philippines. "The success rate of any contraceptive depends on the effectivity of use, and how correctly it is utilized," she said. In other words, it's useless being on birth control if you don't know how to use it properly. So if you haven't already done so, book a visit to a gynecologist and have that conversation. 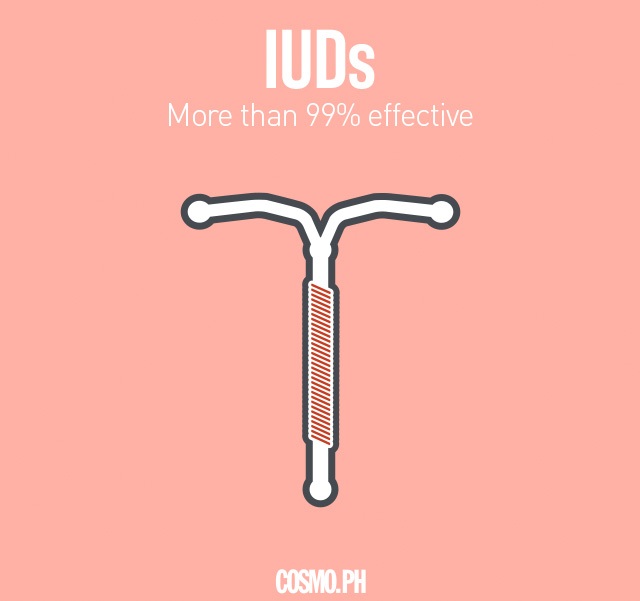 What it is:An IUD (Intrauterine Device) is a tiny device made of flexible plastic that's inserted in your uterus to prevent pregnancy.

How it works: There are two types of IUDs. The non-hormonal type is wrapped in a tiny bit of copper, which acts as a spermicide. It protects you from pregnancy for up to 10 years. The hormonal IUDs (like Mirena) use the hormone progestin to prevent pregnancy, and they last for up to 5 years.

Availability: IUDs require a doctor’s prescription and can only be administered by trained health service providers.

Price:Copper IUDs can cost anywhere from P10,000-P15,000, while Mirena (the hormone-secreting IUD) can cost up to P15,000-P20,000 (not including insertion fee). At certain health centers, the copper IUD is actually inserted for free!

Effectiveness:More than 99%. That means fewer than 1 out of 100 women who use an IUD will get pregnant each year. 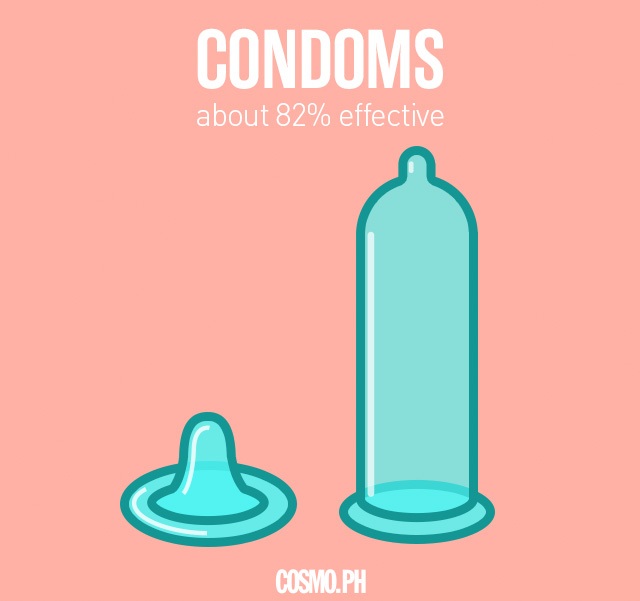 What it is:A condom is a small, thin pouch made of latex (rubber), plastic (polyurethane, nitrile, or polyisoprene), or lambskin that covers the man's penis during sex and collects semen.

How it works:Condoms stop sperm from getting into the vagina, so sperm can't meet up with an egg and cause pregnancy. Lambskin condoms do not protect against STDs, only latex and plastic condoms do.

Possible side effects:There are reports of condoms impairing the penis' sensitivity. Some women dislike the feeling of the condom—since there is a rubber ring on the end, when that hits the vagina, it can be uncomfortable. There are also people who are allergic to latex.

Effectiveness:If used correctly, up to 98%. Most of the time, condoms are only about 82% effective—18 out of 100 people who use condoms as their only birth control method will get pregnant each year. 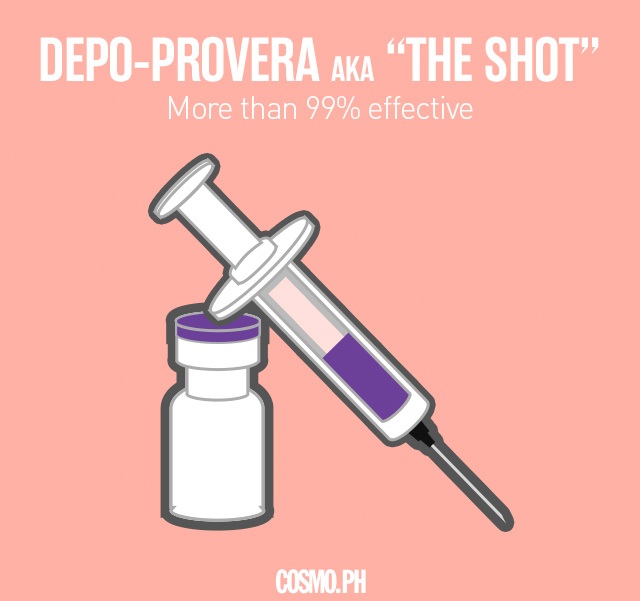 What it is:A birth control injection you get from a nurse or doctor every three months.

How it works: The shot contains the hormone progestin. Progestin stops you from getting pregnant by preventing ovulation. When there's no egg in the tube, pregnancy can't happen. It also makes the cervical mucus thicker. When the mucus on the cervix is thicker, the sperm can't get through. It is safe to use while breastfeeding.

Availability: A prescription is required. The shot is offered at both private clinics and women's health centers.

Price: The Depotrust injection costs P120 (not including administration/injection fee). It needs to be administered every three months.

Possible side effects:Possible weight gain. It can cause heavier flow and/or period spotting. Some patients experience nausea, headaches, and/or breast tenderness as well. 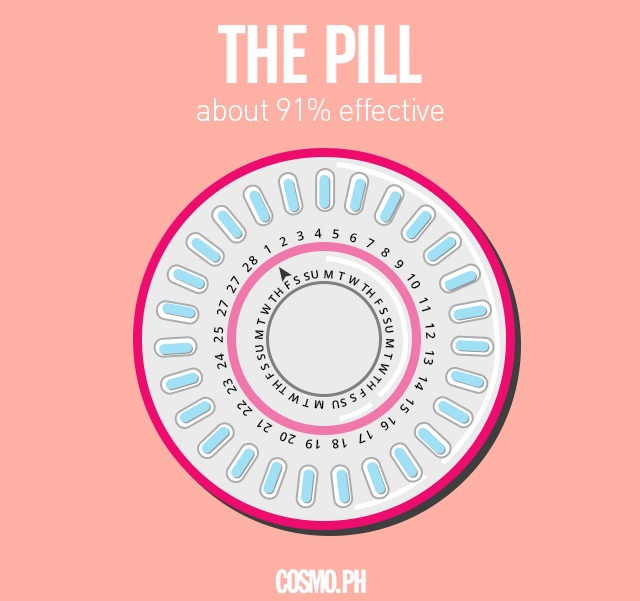 What it is: Birth control pills are a kind of medicine with hormones that you take every day to prevent pregnancy.

How it works:The hormones in the pill stop ovulation. No ovulation means there's no egg for sperm to fertilize. The pill's hormones also thicken the mucus on the cervix, making it hard for the sperm to swim to an egg. The pill can also be used to regulate hormones, like in the case of Polycystic Ovary Syndrome (PCOS).

Availability>: It now requires a doctor’s prescription, but is available in drug stores nationwide.

Possible side effects:Nausea, headaches, and/or sore breasts. Taking the pill can also cause venous thromboembolism (VTE)—the formation of blood clots in the vein. When a clot forms in a deep vein, usually in the leg, it is called a deep vein thrombosis or DVT. If that clot breaks loose and travels to the lungs, it is called a pulmonary embolism or PE. People who have varicose veins, people who are hypertensive or diabetic, and people prone to strokes or heart attacks should be discouraged from using the progestin-only pills. Smokers 40+ in age have a higher risk of developing VTE.

Effectiveness: If used correctly, up to 98%. But if you forget to take it regularly, the pill is about 91% effective—so nine out of 100 pill users get pregnant each year. Vomiting and diarrhea can also cause it to fail. 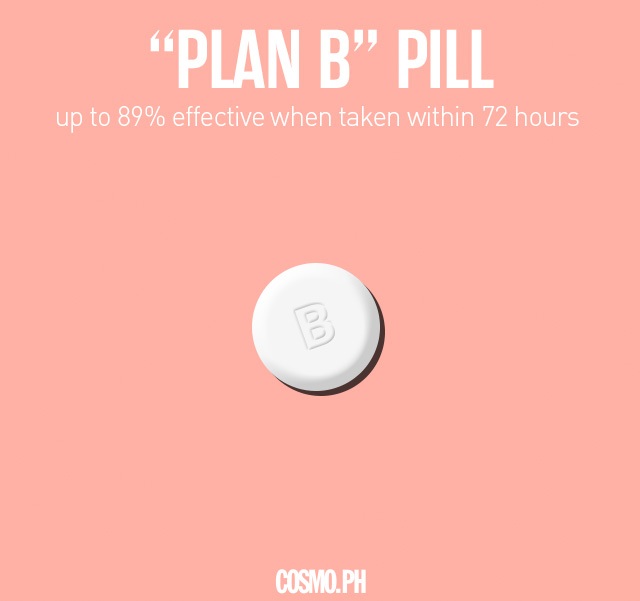 Availability: A prescription is required.

Price: If you do not have access to Plan B, Nordette costs P191. Take four tablets within 72 hours of sexual intercourse, then another 4 tablets 12 hours later.

Effectiveness: Highly effective if taken within the first 72 hours of sexual intercourse.

6. The Implant (Implanon and Nexplanon) 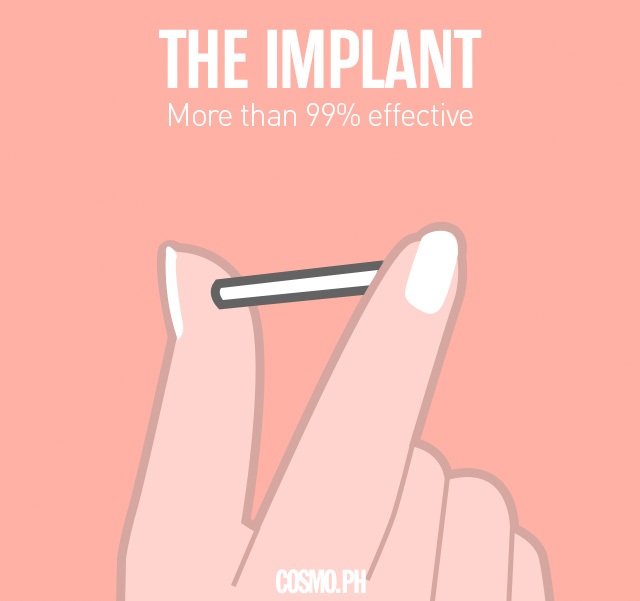 What it is: The birth control implant is a tiny, thin rod about the size of a matchstick. It releases hormones into your body that prevent you from getting pregnant. It prevents pregnancy for up to 4 years.

How it works: The implant is called Nexplanon; there's a slightly older version called Implanon. A doctor inserts the implant under the skin of your upper arm. It releases the hormone progestin to stop you from getting pregnant. Progestin thickens the mucus on your cervix, which stops sperm from swimming through to your egg. It also stops eggs from leaving your ovaries, so there's no egg to fertilize. The implant is not permanent. If you decide you want to get pregnant or you just don't want to have your implant anymore, your doctor can take it out. You're able to get pregnant quickly after the implant is removed.

Availability: It requires a doctor’s prescription.

Possible side effects: Scarring (after insertion and after removal), possibility of infection during insertion.

Effectiveness: More than 99% effective. That means fewer than one out of 100 women who use it will get pregnant each year.

What it is: A man who uses withdrawal will pull his penis out of the vagina before ejaculation—the moment when semen spurts out of his penis.

How it works:Withdrawal prevents pregnancy by keeping sperm out of the vagina.

Possible side effects: Psychological damage–it takes the enjoyment and spontaneity out of your sexual relationship, since you cannot climax together.

What it is: Fertility awareness-based methods (FAMs) are ways to track ovulation—the release of an egg—in order to prevent pregnancy. Some people call FAMs "natural family planning." The Calendar Method requires you to chart your cycles on a calendar.

How it works: FAMs work by keeping sperm out of the vagina (abstaining from sex) in the days near ovulation, when a woman is most fertile. Don't use the calendar method if all your cycles are shorter than 27 days.

Effectiveness: Low (75-80% at most) due to high possibility of miscalculation of the woman’s fertile period.

What it is: Another Fertility Awareness-based Method (FAM). You have to check the changes in your cervical mucus every day for the first part of your cycle until you are sure you have ovulated.The hormones that control your cycle also make the cervix produce mucus. It collects on the cervix and in the vagina, and it changes in quality and quantity just before and during ovulation.

How it works: Insert a finger into your cervix. After your period, there are usually a few days without mucus. These are called "dry days." These may be safe days if the cycle is long. When an egg starts to ripen, more mucus is produced. It is generally yellow or white and cloudy, and it feels sticky or tacky. If the mucus comes out clear and feels slippery like raw egg white, that means you’re ovulating. When it can be stretched between the fingers, it is called spinnbarkeit—German for stretchable. These are the "slippery days." You will have the most mucus just before ovulation. If the mucus is opaque and is similar in appearance to creamy lotion, then you’re not. After about four slippery days, you may suddenly have less mucus. It will become cloudy and tacky again. You may have a few more dry days before your period starts. These are also safe days.

Effectiveness: Of 100 couples who use the cervical mucus method correctly for one year, three will have a pregnancy. It is difficult to be precise because sickness or vaginal infections can alter the mucus’ appearance.

What it is: Another Fertility Awareness-based Method (FAM). It requires you record your temperature in the morning every day before you get out of bed.

How it works: Usually before your ovulation, there’s a partial dip and then a rise in the temperature–and then it stays high. So you can actually detect when you ovulate. Your body temperature falls again just before your next period. But if you get sick, have a viral infection, or have a fever, your temperature readings get compromised. If you put all three FAM methods together (Calendar, Cervical Mucus, and Temperature Methods), that is called the Symptothermal Method—this lets you be more accurate when you predict your safe days than if you use one method alone.

Effectiveness: Low (75-80% at most). 24 out of every 100 couples who use fertility awareness-based methods each year will have a pregnancy if they don't always use the method correctly or consistently.