18 Ways He Secretly Says 'I Love You'

For the 18 times he's too torpe to say it.
by Amy Odell and Additional text by Gianna Banzon | Jun 3, 2014
Post a Comment
Featured

1. He texts you, "Good luck!" before a big meeting.
Because he knows all your worries/problems/stressors inside and out and believes it's his job to constantly relieve you of them.

2. He trades you drinks if you accidentally order a bad cocktail.
Even though no one knows how to make a margarita/tequila and soda/whatever your favorite drink is just the way you like it. But your tastebuds mean more to him than his own.

4. He picks up your favorite food before you even think to ask him to.
When you're together and want to eat something, he randomly procures something you're craving for as if by magic. (Which it kind of is, because he absolutely reads your mind.)

5. He sits quietly next to you on the couch when he has to work late at home and you want to watch TV, just so he can be with you.
He doesn't care that you're ignoring him, he just wants to share air with you.

6. He asks all the women he knows for help picking out your birthday present.
Because he wants to get it right and make sure you absolutely love it.

7. He puts your comfort before his.
He gives you the good pillow. Or if you're cuddling on the couch, he'll sit up so you can lay down on his lap.

8. He takes the middle seat when you fly together.
So you can have the aisle or window.

9. He gives you piggyback rides home when your feet are absolutely killing you at the end of a night out.
After this happens twice it becomes a ritual and you don't even have to ask him to carry you home—he just scoops you up as soon as he notices you slowing down and clobbering home like you're drunk (which, let's be honest, you might be). 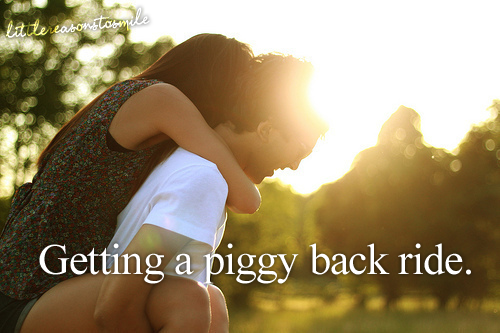 10. He asks you about the "big reveal" on The Buzz Ng Bayan, even though he doesn't care or know anything about showbiz.
Yes, he will tolerate Kris Aquino and Boy Abunda just for you.

11. He always makes an effort with your friends.
Even if you spend an entire meal talking about what Anne Curtis wore yesterday and he has nothing to say about it, or if he had a terrible day at work, he'll always turn on the charm and act interested in your friends and everything they say.

12. He goes shopping with you, and doesn't look pissed off or annoyed the whole time.
Because he loves spending time with you, no matter what you do together.

13. He offers to do your house chores when he knows you're tired.
He doesn't mind staying a bit later to help clean if he knows you just need to crash at 9 like an old lady one night.

14. He volunteers to walk the dog when it is too hot outside and he knows you’re not in the mood.

15. He comes over to your side of the bed to cuddle in the early morning.
Even when he is still basically sleeping. He just knows, even when he's basically unconscious, that he wants to be near you.

16. He gives you the last bite of dessert.
He knows chocolate means more to you than it does to him, and he won't fight you for it.

17. He surprises you with an emoji text even though he hardly uses them.
Because he knows YOU love them, and he wants to speak your language and make you giggle even when he's not with you.

18. He watches Frozen with you and says he likes the snowman.
Then again, how could anyone not like the snowman?! Olaf is everything.

Related:
18 Signs You're With the Man You Should Marry
20 Signs He's in Love With You

This article originally appeared in Cosmopolitan.com. Minor changes have been implemented by Cosmo.ph editors.