6 Things That Can Spoil Your Couple Vacation

You've anticipated that summer getaway long enough, and now, you're about to go on it! Make sure it doesn't go wrong. Keep the ride smooth-sailing with these tips.
by Yummy | Mar 2, 2010
Post a Comment
Featured
This summer, you and your beau plan on taking a trip together. You're getting ready for a week-long fantasy for two, right? Well, maybe. “Yes, vacations are like mini utopias in that there’s no daily grind, but that doesn’t mean you’re going to agree magically on everything,” says sex and relationship expert Joy Davidson, Ph.D., author of Fearless Sex. In fact, trips a deux can be a prime breeding ground for problems: travel headaches, clashing relaxation styles, major pressure for everything to be postcard perfect. But if you know how to deal ahead of time, you can keep your romantic Club Med from morphing into Club Mediocre (or worse, Club Get-the-Hell-Away-From-Me).

Holiday Love Hurdle 1: You Begin The Vacation Stressed Out

It’s understandable. All the details that have to be wrapped up before you can escape—work deadlines, bikini shopping, bill payments—shorten your fuse. Suddenly, a line that’s 10-people-deep at the check-in counter is enough to cause a meltdown. So to ensure your tension doesn’t eclipse the trip, acknowledge the sucky situation and blame it rather than each other, suggests couples therapist Paul Coleman, Psy.D., author of How to Say It: For Couples. “Say, ‘Getting to the airport was a nightmare. Thank God that’s over.’” That way you recognize the torture, but you also confirm that it’s now done with so you can both mentally move on.

Once you’re winding down in transit, ease further into mai tai mode by discussing your plans for the week ahead. Visions of pigging out and sleeping until noon will make your stresses a distant memory. “A few hours into the flight, Gary finally said, ‘I’m so glad we’re away. And I’m so looking forward to seeing you in your bikini,’” Kate recalls. “That was all it took. I wasn’t annoyed anymore.”

Cash can be a problem if one of you is thinking filet mignon while the other is sneaking plastic bags into the all-you-can-eat buffet. To get what you both want, start with the cold hard facts. What’s your budget for meals, tours, side trips, etc.? Once you have a figure, you can strike a balance on how to spend it. Coleman suggests that you mix it up. For instance, have el cheapo lunches so you can justify splurging on fancier dinners.

Then make a list of things you both want to do, and be resourceful. “On a trip to Bangkok, Jerry didn’t want to shell out 150 baht for a guided tour of the temples, which I really wanted to see,” says Jennifer, 27. “But after talking to some locals, we found out about a walk to some cool tourist spots. It was beautiful and private, and we were both happy,” she says. And if despite the clever spending you still crave a little pampering, treat yourself. “When we got back to the hotel, I semi-splurged on a massage, which was still a lot less than the tour would have been, while Jerry hung by the pool, probably counting his coins.”
[nextpage] 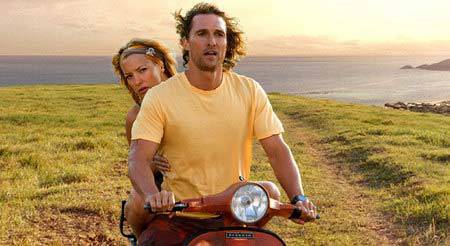 Holiday Love Hurdle 3: Your Idea Of Fun Doesn’t Mesh With His

Love gurus will tell you that compromise is so healthy. Yeah, right—not if it means ending up with a watered-down version of the vacation you really wanted. “My job is stressful, so I wanted to lie out on a beach somewhere, comatose,” says Nina, 29. “But Mark wanted to go hiking, biking, and sweating.” Fact is that while a vacation is partly about getting close, it’s also about having F-U-N. So in the name of achieving that, you don’t have to do every little thing together. “Mark and I did go to an island, but while I spent the afternoons reading books on the beach, he was off windsurfing or rock climbing. It was bliss,” says Natalie. So detach from the hip on some days. You’ll both get what you want and have exciting stories to tell each other afterward.

Also, allow each other to suggest an activity the other person has to try. Yes, that means you may have to go on one hike, but you’ll probably enjoy yourself. Plus, it shows a willingness to accommodate each other’s needs. Most important: “Don’t be tit-for-tat (‘I give up something, you give up something’), because you end up keeping a mental scorecard and feeling resentful when it doesn’t add up,” advises Coleman. Instead, be open to trying each other’s styles. And hey, who knows what frisky thoughts will enter your mind when you reach the top of the mountain.

For some, vacations mean shagging like Viagra-popping monkeys. For others, it’s a pig-out and snooze marathon. So how to jibe your desires? If your sex drive is in siesta mode and he’s the sex-crazed chimp, don’t feel pressured to throw him a mercy bonk every time he bones up, insists Davidson. But bear in mind, your libido may be jet-lagged, which he may be able to remedy with some sensual, hands-on persuasion. If you’re really not feeling the magic, just let him know you need a little time to ease into things.

If it’s just the opposite—you own the insatiable sex drive; he’s there for a beer buzz—partaking in a few adrenaline-pumping activities may launch his loins. “Any exhilarating experience—whether it’s cycling, parasailing, or exploring a foreign city—strengthens your bond,” says Coleman. “Plus, it’ll boost his testosterone levels, making him feel infinitely more sexual.” To further stoke his fire, make some sexual suggestions in a nonsexual setting. Mention doing it in the late afternoon, for instance, or a randy location switch, like swapping the bed for the balcony. Your dirty desires will give him a seriously bad case of sex-on-the-brain over breakfast.

Don’t feel guilty about craving a little me-time. You’re trying to rejuvenate, and that involves time together…and apart. So call a mini vacay from the vacay for some time inside your own head, says Coleman. “You relax by yourself in a way that you can’t when you’re with him.”

The trick, however, is asking for time out without coming off like an anti-social hermit. One option: Choose an activity that is distinctly chick. When Julia, 26, needed a little solo stretch, “I went accessories shopping, and another time, I booked a treatment at the resort spa,” she admits. “Jay was not at all interested.” Alternatively, just explain to your guy that you need time to detox your fried brain and say you’ll meet him back at the room in one hour. But don’t stay away too much longer than that or he may fear you’ve found yourself a cute cabana boy.

In the alternate universe that is a vacation—where we expect to be a super-couple who agree on every little thing—spats seem so much worse: (a) Hi. You’re supposed to be having an amazing time, and (b) Who packed the emotional baggage? Regardless, it’s in your best interest to patch things up fast so you can start enjoying some quality time together, pronto.

“First, you have to decide what battles are worth waging,” says Davidson. If he invites his new best friend Dave the barman and his girlfriend, Cindy, to crash your evening and you were looking forward to a romantic dinner for two, it might be worth sucking it up and letting the good times roll. If it’s a deeper issue, such as the way he cops an attitude if you sleep too late and miss the “shining” sunrise, hashing it out right there saves you from brewing resentment and exploding later. “Give yourselves one hour to seek a solution,” says Davidson. When the time’s up, hopefully, you’ll have reached a compromise…even if it’s agreeing to table the discussion (and angry feelings) until you’re back home. Then you can proceed directly to makeup sex.
ADVERTISMENT - CONTINUE READING BELOW ↓
ADVERTISMENT - CONTINUE READING BELOW ↓
Recommended Videos
Read more stories about
EXPLORE COSMO