Dating Tips: How To Talk BASKETBALL With Your New Guy

Are you seeing a hoops fan? With UAAP season kicking off tomorrow, we're giving you a crash course on the popular sport (so you can impress him!).
by FinancesOnline.com | Jul 8, 2011
Post a Comment
Featured

You women swoon over gorgeous athletes (especially this month on Cosmo.ph--just check out Cosmo Online Hunks!). We know you love their smokin' bods and flaming passion, but, admit it--if you're a non-sporty chick, you can get a little lost when they whip out the sports terms. You don't even have to be dating a hot athlete--just date any ordinary hot dude, and he's bound to be a sports fan. Almost all guys are. Whent s-p-o-r-t-s crops up into the conversation, your initial reaction may be to change the topic, and then avoid talking sports with him altogether. But, being able to appreciate his passion is a total turn on; guy's dig a chick who can join in the conversation.

Here's your chance to impress him with your knowledge (even just a little bit) of sports. In preparation for UAAP's Official Opening tomorrow, we'll be giving you a series of primers on must-know basics and current events in four popular sports—basketball, football, volleyball, and swimming--just in case the dude you're seeing decides to take you to one of the games on a date. We'll begin with the most popular of them all in the Philippines, basketball, and post the rest in the next three days.

Time. The game is split into four quarters. Ten minutes each for amateurs and 12 minutes for pros.

Players. There are five per team: two guards, two forwards, and a center.

Points. One shot gets two points, unless it comes from behind the three-point line (the big arc), then it's three points; a free throw gets one point.

Why is the referee blowing his whistle? It's probably one of these violations: 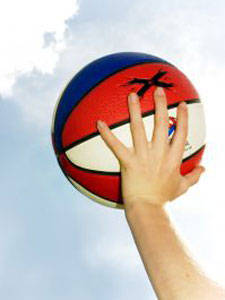 
Continue reading below ↓
Current events to tune into:
The NBA Finals just finished early June, where the Dallas Mavericks beat the Miami Heat for the title. It’s the first title for the Dallas Mavericks.
Smart Gilas, the official national basketball team made of college standouts (like our beloved Chris Tiu) recently competed in the televised FIBA-Asia Champions Cup that wrapped up early this June. They got a fourth-place finish. (FIBA is the governing body of basketball in the world.)


Continue reading below ↓
Watch for these Universities in the UAAP:
The Ateneo de Manila Blue Eagles are in the spotlight as current champions, now gunning for their fourth straight championship. Their basketball program is said to be one of the best.

The De La Salle University Green Archers are fierce rivals of The Eagles and a perennial Final Four contender, known for their "vaunted pressing defense"--meaning they pressure the offensive team even before they put the ball in to play.
The Far Eastern University Tamaraws are a historically successful basketball program. They're big contenders to the title, and have lent many players to the national program.

We hope you now actually know when to cheer and when to boo with your guy (and which team to boo). Watch for our crash course on football, swimming, and volleyball in the next three days!