Karylle Opens Up Her Bag To Cosmo

What does the singer-songwriter-actress carry around in her Tod's tote? Cosmo fills you in.
by Nora Hizon | May 4, 2010
Post a Comment 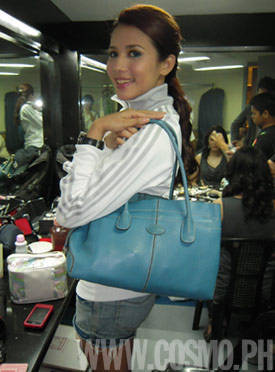 Karylle, who just turned 29 recently, is blooming. The talented-singer actress has always had a busy showbiz schedule since she broke into the biz years ago. After releasing her first album, she became a host and performer in GMA-7's now defunct SOP. She ventured into TV acting and soon starred in teleseryes like Encantadia, and later I Love Betty La Fea and Dahil May Isang Ikaw, to name a few. Now, the talented singer-actress co-hosts ABS-CBN's Sunday variety show ASAP XV. You also get to see her in the afternoon soap Magkano Ang Iyong Dangal? As if her schedule is not packed enough, Karylle also happens to do theater acting and perform in concerts here and abroad, among other things.

On one such occasion, while Karylle was preparing for a concert at the Music Museum, Cosmo had the chance to chat with the multi-talented star. We asked her if she's willing to show us the contents of her cute blue Tod's bag. She happily obliged.

As she was fixing her things for the shoot, Karylle blurted out this observation: most of her belongings are in red. You can tell how this girl takes her work very seriously, as her bag is filled with work stuff and things to keep herself organized. You won't find too many of the usual kikay things you see in any other girl's bags when peek inside Karylle's purse. What fills it up are her planner, note pad, and papers--all organized and clasped together with a cute paper clip.

See the contents of Karylle's Tod's tote by clicking the 'view gallery' button below.