'Having fun, hooking up with the person that she told me not to worry about.'
by Steph Esguerra Olarte | Oct 7, 2021
Post a Comment
Featured

Following AJ Raval's confirmation that she and Aljur Abrenica "understand each other" and "care for each other," AJ's ex, Axel Torres, shared an emotional post on IG.

"Right now, I'm standing here with nobody to love and my ex is probably out having fun, hooking up with the person that she told me not to worry about. But it's alright," wrote the former Pinoy Big Brother housemate.

Was Axel referring to Aljur as the "person" he didn't need to worry about?

Apart from his post, Axel also shared IG Stories of what appeared to be throwback photos of AJ when they were still together, captioned with lyrics from Olivia Rodrigo's song, "Traitor."

"You betrayed me
And I know that you'll never feel sorry
For the way I hurt, yeah" 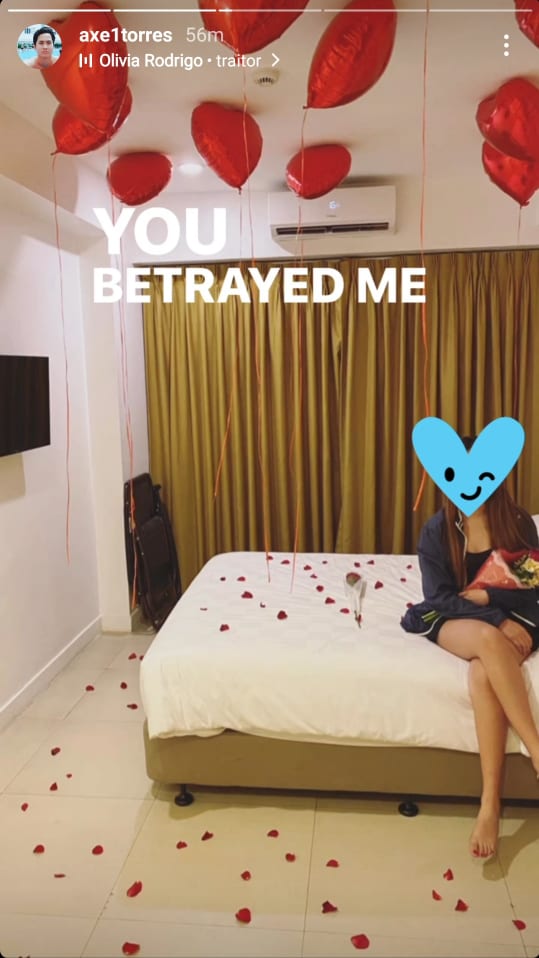 In this IG Story, we can see AJ's tattoo on her chest:

After Robin Padilla said in an interview that the separation of his daughter Kylie Padilla and Aljur involved a third party, netizens speculated that Aljur was seeing his Nerisa co-star, Cindy Miranda. In an Instagram post, Cindy, later on, denied the accusations. AJ was also part of the cast of Nerisa.

Rumors circulated that AJ and Aljur were in a relationship after a video went viral of a masked pair—whom netizens identified as the two celebs—*holding hands while walking* at a mall.

Months after announcing their separation, Kylie said on Twitter that she has "no issue" with Aljur being linked to other women as they had "mutually agreed to date other people." Kylie and Aljur are currently focused on co-parenting their two children, Alas Joaquin and Axl Romeo.