An Honest Review Of 'Scarlet Heart: Ryeo' By A Period Drama Hater

Scarlet Heart Ryeo is a 2016 period K-drama with a star-studded cast. The drama is a cult-favorite among fans and stars IU, Lee Joon Gi, Kang Ha Neul, Kang Ha Na, Ji Soo, Baekhyun, and more. In the Philippines, you can watch Scarlet Heart Ryeo on Viu.

In modern-day Korea, Go Ha Jin drowns in a river during a lunar eclipse and time travels to the Goryeo era (over a thousand years ago). Once there, it is revealed that she is in the body of a woman named Hae Soo, the cousin of the wife of 8th Prince Wang Wook. She shortly befriends and becomes close to the princes (sons of King Taejo, the founder of Goryeo) who grow fond of her because she's not like other girls, a.k.a. she's fun and lively compared to the women in those days who were mostly quiet and reserved. She also falls in love with a prince (not Wang So whom she appears with on the drama's promotional posters).

Long before King Taejo dies, he declares his firstborn Wang Mu as the crown prince to the dismay of some members of the royal household. Because of this, they attempt to assassinate him multiple times, insisting that they are the rightful heirs to the throne. When King Taejo finally dies and Wang Mu ascends to the throne as King Hyejong, everything just grows dark; although there are already a handful of bad seeds at the start of the show, some characters also start to show their evil side because of their thirst for power.

From there, things go from bad to worse, with the protagonists being executed and the antagonists getting away with all their wrongdoings. Hae Soo herself has a couple of near-death experiences but is saved each time by the princes; it is also around this time that she and Wang So finally get together. King Hyejong dies after a relatively short reign and is succeeded by King Jeongjong (one of the princes), who is cruel and unjust.

After a series of unfortunate events, King Jeongjong dies and is followed by King Gwangjong (another one of the princes). Despite having finally achieved his goals and proving his worth, he realizes that he, in turn, is sacrificing the very reason he wanted to be king: love.

Hae Soo's spunk and acts of rebellion would've had her killed very early on, but she manages to survive because of how fond the princes are of her. Even if she has the best of intentions, she ultimately ends up being swallowed whole by the very the system she tried so hard to change.

Aside from being a recognized singer and performer, IU appeared in the popular series Dream High and the 2016 series The Producers. Since Scarlet Heart, she has appeared in dramas like My Mister and Hotel Del Luna. Here's a complete list of IU's dramas you should watch.

Also a singer and performer, Lee Joon Gi also appeared in the 2005 series My Girl (with Lee Dong Wook) and the Hollywood movie Resident Evil: Final Chapter. In 2020, Joon Gi made his TV comeback in the thriller Flower Of Evil, where he played a married man with dark past.

Perhaps Filipino viewers will most likely remember Kang Ha Neul from The Heirs with Lee Min Ho and Park Shin Hye. In 2019, Ha Neul starred alongside Gong Hyo Jin in the Netflix series When The Camellia Blooms. For his outstanding role in that drama, he was awarded Best Actor at the 56th Baeksang Awards.

Hong Jong Hyun is best known for his leading roles in Her Lovely Heels and Mama, both shown in 2014.

Her role as Yeon Hwa in Scarlet Heart: Ryeo may be her first big one, but she's already in the running for the Best New Actress (Television) award in the 53rd Baeksang Art Awards. Well-deserved! In 2020, Han Na starred in the Netflix drama Start-Up, where she played the role of Won In Jae, the estranged sister of the lead character played by Bae Suzy.

Baekhyun is best known for being a member of the South Korean-Chinese boy group EXO. Scarlet Heart: Ryeo is his first foray into the K-Drama world.

Ji Soo made his acting debut in 2009 and has been in the limelight since, with roles in Doctor Crush and Strong Woman Do Bong Soon under his belt.

If you're a huge musical theater fan, then you might've recognized Kim San Ho from Korean stage productions of Grease and Legally Blonde.

Yoon Sun Woo's most notable appearance was in the movie Miracle in Cell No. 7.

1. The timeline of events in Scarlet Heart: Ryeo is loosely based on history. The series followed the succession of monarchs in the Goryeo dynasty (Taejo, Hyejong, Jeongjong, and Gwangjong), but we don't know for sure if a certain king really died of poisoning or if Hae Soo even existed.

3. GMA's adaptation includes "Total Eclipse of the Heart" in its soundtrack.

4. The cast of Scarlet Heart: Ryeo appeared on the cover of Cosmopolitan Korea. They proved that they look good in period and modern clothing! 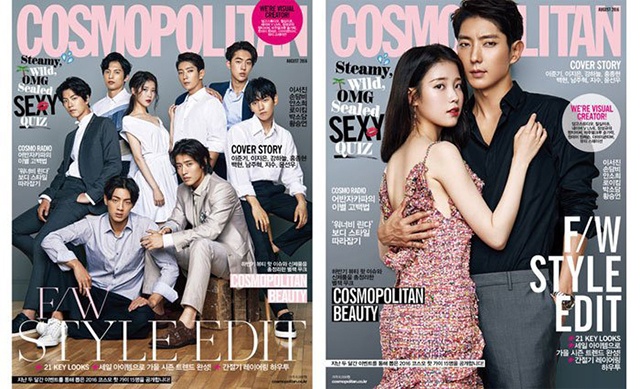 5. K-Pop idols Seohyun and Z. Hera also had roles in the series as Woo Hee and Park Soon Duk, respectively.

The story is nice but heavy—it's definitely not a rom-com. It also helped that the actors and soundtrack were very good. However, the ending was BITIN, like it made you wonder what was going to happen next. —Boizei Malicdem

What's refreshing about Scarlet Heart: Ryeo is how it injected humor and suspense in a fantasy-filled period drama. I get bored with period dramas and never cared for them, but this one got me hooked. I loved how Go Ha Jin in the body of Hae Soo lived her life as a woman of the Goryeo era but surprised the men then with her pieces of knowledge from the modern world. From that ^o^/ emoji to her versions of soap and BB cream—all of them were epic details in the series! And you get immersed in the rich culture and history of South Korea in the process. Plus, all those kilig moments with such handsome men didn't hurt! —Ginyn Noble

First things first: THE SOUNDTRACK IS AMAZING—probably even the best soundtrack I've heard from any K-Drama series! I'm not a fan of K-Pop, but I found myself singing the songs in my head again and again.

I didn't think I would ever be as invested in a drama series as I was while watching this show. The usual kilig feelings were expected, but I also got genuinely upset when all these awful things were happening to the characters. It was even more frustrating because they didn't really have to happen, but they did because of all the rules and generally because of the way things were in the past. An example would be how they executed those who served food containing poison, even if those people had no idea what was going on—talk about shooting the messenger.

I totally agree with what my friend Yela said—the drama did play with my feelings. I was rooting for Hae Soo and another prince because they were just ~*perfect*~ for each other, but I knew they weren't going to end up together because of the drama's promotional posters. It was annoying that they made me fall in love with their pairing even if I knew they weren't going to be together forever. I constantly thought, "What could possibly go wrong?" because of how good things were going for them, but things went from "awwww sila talaga eh" to "k lang" to "oh no what's happening" to "THIS GUY IS HORRIBLE!!!" in a span of a few episodes. The way Wang So's character was written made me hate him, too, so I wondered why they paired him with someone as good and pure as Hae Soo.

But overall I think I enjoyed Scarlet Heart: Ryeo despite it being a period drama because it still had the elements from K-Dramas that I love, like the adorable characters and kilig-inducing scenes. I also found myself Googling things like which prince is the "current" king and how history explained this character's death while watching the series.

Well, the princes are cute, too, but I guess we all knew that already.

Those who want to really feel for the characters—I know I did! Scarlet Heart: Ryeo is also good for those that don't like shallow dramas since it tackles issues that you can relate to your life now, whether it's family or politics. You might also want to check this out if you love Asian history—but don't expect it to be as truthful as your history books!