Juancho actually proposed months ago during a family vacation in Boracay.
by Dyan Zarzuela | Nov 27, 2019
Post a Comment
Featured

Joyce Pring just revealed that she and Juancho Trivino got engaged on August 3 during her mom’s birthday trip in Boracay. “He flew our family and closest friends and surprised me with the sweetest pakulo out of all the pakulos he’s ever pulled.”

“Although we had been praying about this decision for a couple of weeks and even attended pre-marital counseling in church (more kuwento soon), I was still so shocked and started ugly crying on the beach when he kneeled and took my hand and asked me to be his wife.” Aww! 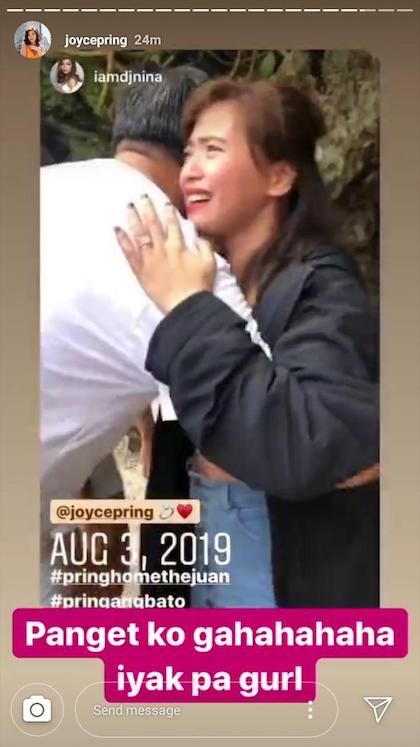 Since then, the couple has been busy planning the wedding, the date of which has yet to be revealed. Joyce will be wearing a bridal gown from the Liz Martinez collection of Spina Bride.

The Unang Hirit co-hosts first met in April 2014 at an event where Juancho asked to take a photo with Joyce. They crossed paths again when they started working on the morning show. After months of speculation, they revealed in May that they were officially in a relationship.

Before Joyce confirmed their engagement, netizens had been congratulating the couple and commenting on what seems to be an engagement ring seen in her IG photos.