Traveling on a budget may seem impossible, but this power couple has mastered the art of jet-setting without breaking the bank. Follow their lead!
May 5, 2012
Post a Comment
Featured 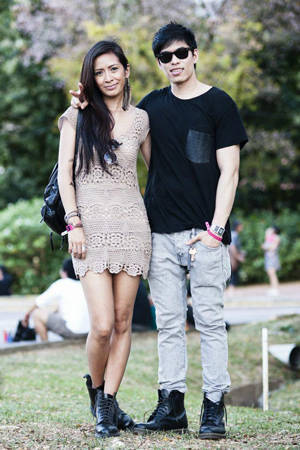 Traveling is one of the best ways to spend your summer months, but it's hard to go about it without burning a hole in your pocket. Models Robby Mananquil (brother of supermodel Raya) and Valerie delos Santos have found that with a little resourcefulness, travel doesn't have to be too costly.

The couple is the brains behind Street Beat Boutique, an online store that was born out of their common love for travel and shopping. As the business began to grow, the couple started going on trips to look for stylish clothes and accessories that they could sell online. But rather than conducting all their work over the net, Robby and Valerie opted to instead fly to the biggest shopping hubs in Asia to source products themselves.

In their quest to find items of the highest quality, they soon realized that high airfares would be one of their major obstacles. But after years of traveling together, they've found a way to keep costs down while they jet-set.

Take a cue from Robby and Valerie and book your flights two months in advance. Look for the best deals and search for promo fares beforehand.

Their airline of choice is Cebu Pacific, thanks to the company's regular seat sales. Because the airline offers the most number of flights to the biggest network of destinations in Asia, Robby and Valerie consider it the third partner in their business ventures.

They also have another useful trick you can cop: "We take the first flight on day one of our shopping trip, then [take] the red-eye flight on our final day. That gives us more time to go around and hunt for premium items."

So whether they're scouring the racks of the Shilin Night Market in Taiwan or taking a yummy food break in Japan, this power couple gets to see the sights and bring home the goods without having to break the bank. Follow in their footsteps and be a money-savvy traveler!


Launch the gallery to see some snapshots from Robby and Valerie's travels!