Thai Billionaire Anne Jakrajutatip Reacts To Netizens Shipping Her And Clint Bondad: 'He's a brother to me'

Fans of Thai CEO, billionaire, and trans woman Anne Jakrajutatip couldn't help but approve of Clint Bondad after she reposted a photo of the two of them together. Anne is the CEO of JKN Global Media, a content provider in Thailand.

"I could knock you out at any time if I wanted to, @clintbondad" Anne said in her post. "I don’t compromise next time, my friend!"

This isn't the first time she's shared a photo of her with Clint. Just about a week ago, she personally toured Clint around Bangkok.

Now, Anne's fans can't help but totally ship the two of them, what with their undeniable closeness in the photos. Anne totally set the record straight, saying that Clint's just like a brother to her.

Another user said they looked good together, to which Anne replied, "Yes, as a brother [to a] sister. He's not my type! Sorry!"

Another netizen pointed out that the two are just friends, which Anne said was the "right understanding." 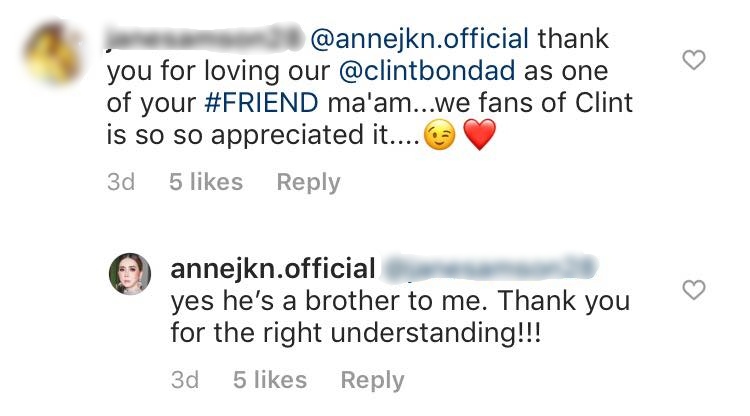 Another user, however, did express her disappointment over Filipinos comparing Anne to Clint's ex-girlfriend, Catriona Gray. She pointed out how some people think Clint's only "with" Anne because of her wealth and people can't accept friendships between straight men and trans women. Again, Anne denied anything beyond friendship with Clint, saying he's just like a brother to her. 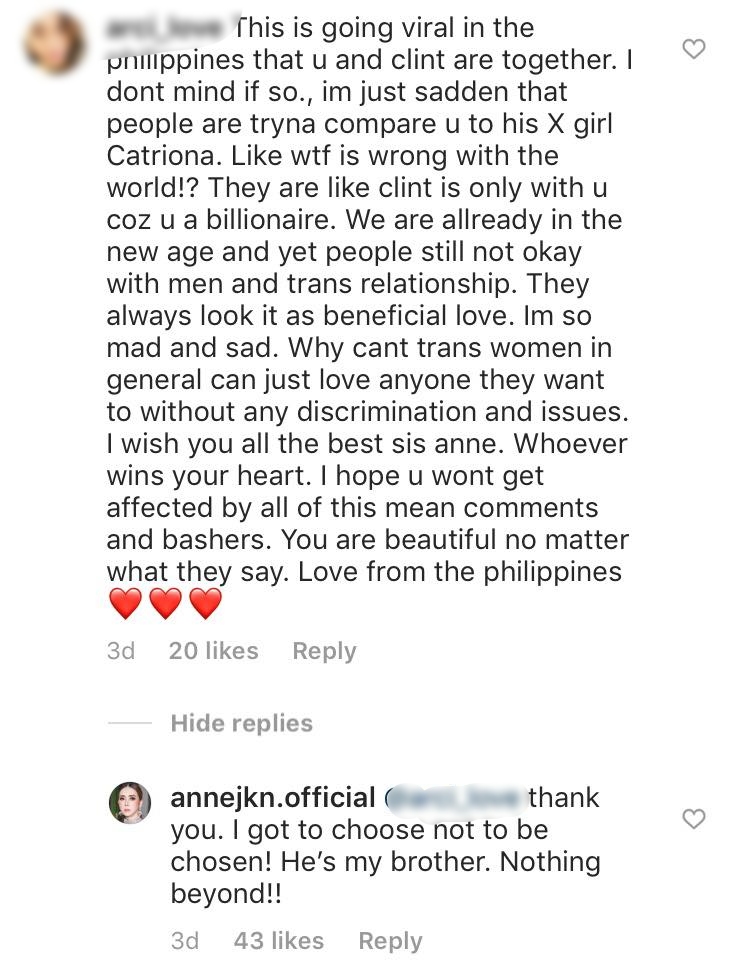 Clint and Catriona broke up earlier in 2019. In an interview, Catriona said that they "outgrew each other" and it "just didn't work out." They were together for six years.

Clint also shared in an interview that it was mostly because of how Catriona constantly being in the limelight took a toll on their relationship. He later on clarified that it was he who pushed for the breakup to become official, and how he had gotten at one point "massively depressed for a long time."

Clint was recently part of the GMA series Love You Two, which starred Jennylyn Mercado, Gabby Concepcion, and Solenn Heussaff.