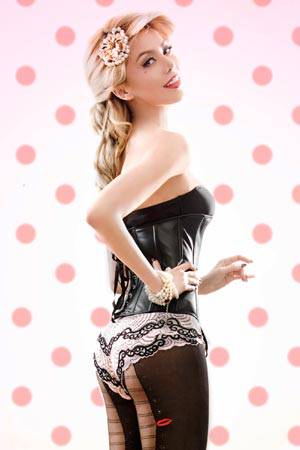 The world of modeling has often been a topic of heated debate for being apparently glamorous or overrated. Whether or not a model writes this entry, it must be said: People who have many negative things to say about the modeling industry are either jealous or simply ignorant.

No one can blame such people for their misconceptions because from the outside, the glitz and grandeur that the velvet-roped modeling industry evokes can be quite alluring--and it admittedly is. However, as with any industry, nothing is always as it seems. So allow me to now debunk the top myths about models!

Whether you're a model or not, there are just some people in this world who can eat tons of food and not gain an ounce. However, since models make a living by maintaining a healthy, svelte body, extra attention is paid to proper (even strict, at times) diet--along with exercise, of course.

It's even an inside joke among us models that PMAP President Phoemela Baranda may be all woman, but she can eat rice like a man! Talk about being blessed with fantastic genes!

Models are called "models" because they are paid to look a certain way with the rigorous help of hair and makeup styling, and nowadays, Photoshop. This leads the general public to think that all models look like those hyped up images 24/7!

Models, like everyone else, are only human. Even supermodels can use the help of concealer and digital enhancement. Though at times, Photoshop can alter features to the extreme, models admittedly would appreciate the help of digital retouching to help make their images more magazine-worthy.

Model/TV host Teresa Herrera once told me when I was just starting my career that modeling is a 24-hour maintenance job. We always need to look and feel great because we are in the public's scrutinizing eye. Needless to say, there is much pressure for us to look highly presentable on and off every job we do.

Myth #3: Models only hang out with other models.

People oftentimes assume models only like to associate themselves with other models. Well, it's yes and no. As with any work environment, we all gravitate toward those we are most comfortable with, right? It's as if to say lawyers only like to hang out with other lawyers. You'll probably never hear that assumption, though, since it's not as juicy a comment.

Models are also aware of how the vindictive public may see them: dumb, arrogant, self-centered, and the like. Survival instinct dictates not feeding yourself to the wolves unless it's a matter of selfless martyrdom. So, it only makes sense to hang out with other people who are in the same industry.

Myth #4: Models get everything for free.

We wish! Yes, at times we get some free clothes here and there, but other times, the clothes we wear cost even more than what we're getting paid!

There are definitely jobs that offer freebies as either part of the payment or a "bonus" because the client liked us so much. However, when it comes to getting into certain VIP events, clubs, or bars, models are given free entrance, drinks, and other perks because it draws in more customers who want to meet, greet, or even dance with their favorite top models.

Again, yes and no: When one is called a "working model," this means they are full-time models who can afford to wait for jobs to come along since they're getting enough bookings to sustain a decent living. But if someone were to say they model once in a while, but they have a real job, this is another scenario where modeling is not the main source of income.

Now, for those who've done just one or two modeling jobs, unfortunately, it wouldn't suffice to officially call oneself a "model." You may say, "I've experienced what it's like to be a model with the few jobs I've done."

The bottom line is, like any other job, modeling is a legit form of livelihood for some. Hence the term "professional models."

So, do you girls have any other model myths you wish to clarify or have us debunk? Keep those questions coming!