So Inspiring! This Woman Went To The Gym For 100 Days Straight

It can take some serious motivation to get ourselves to the gym on one occasion, never mind going 100 days in a row. But that's what Lakeisha, the inspiring subject of a video doing the rounds on social media, did—and she's got an incredible transformation to show for it.

Initially, we see Lakeisha a year ago, right at the start of her fitness journey, describing herself as "overweight" at 348 pounds. But the physical excess on her body wasn't the only thing weighing Lakeisha down; as a result of low self-esteem about the way she perceived herself to look, she was also suffering from depression.

"I always just thought of myself as someone who was unattractive and who was not fit to be married or have kids," she says bravely in the video. "I have low self-esteem. I am going through depression and I want to change all of that."

So change is what Lakeisha made happen by being proactive in her quest to get fit. She resolved to go to the gym every day for 100 days, and she managed to stick to it.

"I want you to see how one person really changes everything about their lives," she says during the video. And evidencing her dedication to the plan, in another clip Lakeisha explains how it is "pouring cats and dogs and I think some beetles outside... but I'm going to go to the gym and I'm gonna work my butt off."

So how did she get on? Nothing short of amazingly. By day 90, Lakeisha's flexibility had sky-rocketed as she proudly showed off her new skills in front of the camera: 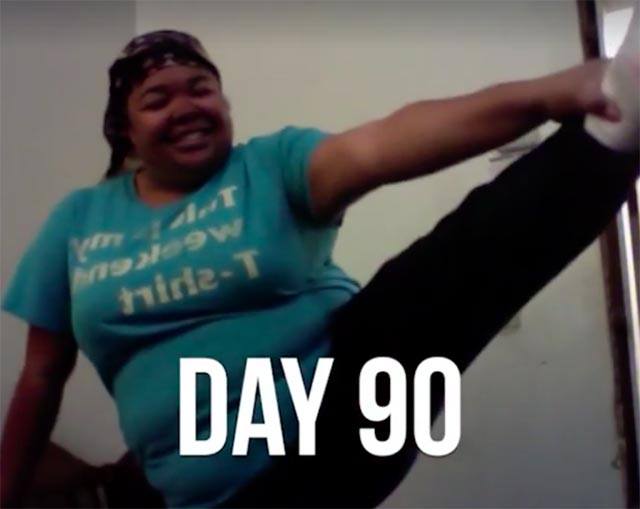 By day 100, Lakeisha was confident enough to stand alongside the trousers that she'd worn last year to reveal that she'd dropped down to a US size 22. 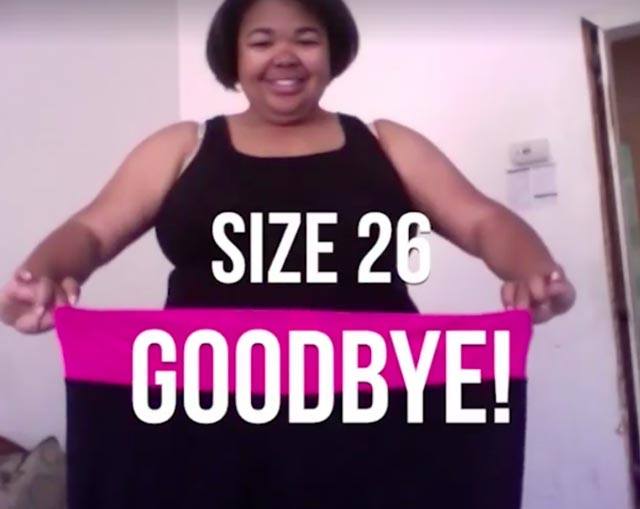 In total, including her 100 days at the gym and her efforts to get fit prior to that, Lakeisha shed 51 pounds in a year (that's roughly the equivalent of five medium-sized bowling balls, FYI) and had got herself out of what she calls "the 300 club."

And the smile on her face showed how pleased she was with herself for having done it. While she's lost a load of weight, Lakeisha emphasizes more importantly that what she's found is "love in myself."

Speaking once more to the camera, Lakeisha says: "I have to learn a lot of things, and there's still more to go, and I'm super excited to do it".

What a positive inspiration to make use of every time you can't be bothered to get up from the sofa to get to the gym. Here's hoping Lakeisha continues to improve not only her health and fitness but also her happiness in 2017.