What I Learned About Love From My Grandparents

'Their story reminded me that if you feel so strongly for someone, by all means, stick around.'
by Cheekie Albay | Dec 18, 2016
Post a Comment
Featured

I’m one of those people who take ages to move on from someone they love. I’d have friends screaming in my ear that I should quit the drama and shoving me towards the nearest single guy who’s not completely despicable, and though I’d laugh and joke along because it’s funny when you’re so single, friends are practically putting up a want ad to find you a boyfriend, I’d go home at night and still be pining away for that same someone.

Sometimes, on those nights when I’m alone and pining away, I wonder if maybe I should listen to my friends and just move on already. Maybe the only way to really move on is to deny how you feel and just go through the motions of moving on until it becomes the truth.

It was during one of those nights that I remembered a composition I submitted about my grandparents’ love story back in college. Their story reminded me that if you feel so strongly for someone, by all means, stick around. 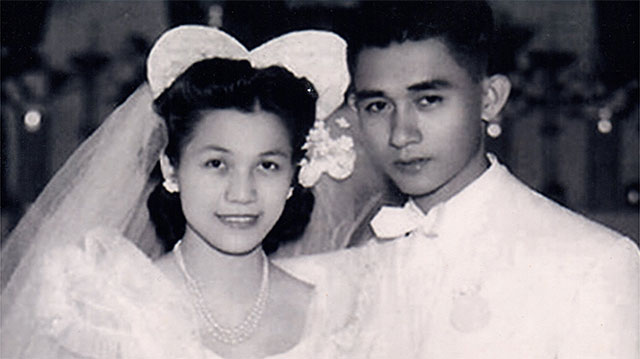 My grandmother on my father’s side, Choleng, was born in 1922 to a well-off family in Alitagtag, Batangas. Her father went on to become the undefeated mayor of their town for 25 years, four of which were during the Japanese occupation.

It was in the first grade when Choleng met Vic, a bright, handsome boy who would become my grandfather. They were classmates, and they often performed together in school programs as part of a singing quartet.

After graduating from grade school—Vic had finished valedictorian of their class—they went on to different schools: Choleng in a private school run by nuns, and Vic in a public high school.


It was in high school when Vic started sending Choleng love letters. He had a cousin at Choleng’s school who would deliver the letters for him; sometimes there was even a picture of him enclosed—the early 20th century equivalent of today’s gratuitous selfie. At first, she paid him no mind because at 13 years old, she was too young to know what to do, but she didn’t turn him away, either.

One day in their third year while they were both visiting a community to teach catechism, Choleng watched Vic from afar without him being aware of it. She couldn’t put into words how she felt in that moment, but somehow, her feelings for him had changed.

Vic continued to send Choleng letters and by this time she had begun replying to them, but she wouldn't talk to him in person for fear of being found out by her parents. They were both still in high school, and Choleng’s parents forbade any romances while their children were still studying. However, other people had picked up on the attraction between Vic and Choleng, and the news reached her parents. When they found out that the boy she was rumored to be involved with came from a family of a different political affiliation and was beneath them in social standing, they warned her to stay away from him. 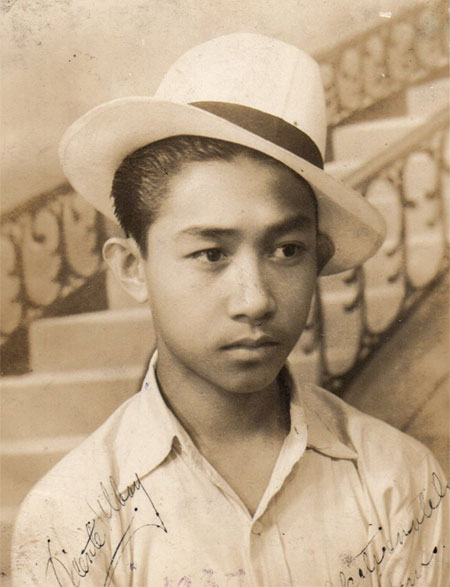 When Vic and Choleng went off to college, they rarely saw each other still, but they continued to send each other letters through sympathetic relatives and shared meaningful looks and snatches of conversation the few times they crossed paths.

When the Japanese occupation happened, Vic and Choleng both joined the town’s church choir. This gave them more time to spend together, but still they kept their distance. They made sure no report of their budding romance reached Choleng’s parents’ ears.

On moonlit nights, Vic would walk five kilometers just to pass by Choleng’s house. To alert her that he was outside, he would whistle the tune to “I Understand”—their song—and hearing this, Choleng would rush to the window to watch him pass by. This was how they got by days of not being able to express their love freely; they developed their own code, and that code was enough.


Their secret love went on for six long years, throughout which neither of them gave up.

Once Vic had finished his engineering degree, landed a job, and proved himself a decent match, Choleng’s parents finally relaxed and allowed them to be together. They tied the knot in 1948, had six children, and were happily married for 46 years until Vic’s death in 1994.

Recently, I asked my grandmother to recount their love story. She still talks about it like a giddy schoolgirl, giggling with each memory, the details fresh in her mind even at 94 year sold. She said they were each other’s first love, they never broke up, and when I asked her if there was ever anyone else for either of them, she smiled and shook her head.

We rarely hear stories like this anymore. If we found out that a friend had been hanging around for years waiting for some guy to take the relationship to the next level, we’d laugh in her face and say, “Geddoverit, you can do so much better, go on Tinder or meet my friend Mark, he’s single and cute.” Of course, there are many cases where the guy isn’t actually worth the wait at all, in which case said friend really should geddoverit because she can do so much better and should go on Tinder or meet Mark who’s single and cute. But what if no one else has ever made you feel the way this guy has? Should you just pack it all in and go with Mark because modern society has made it much easier to meet up and hook up now anyway?

It’s this common mindset these days—that it’s easy to replace someone you love—that I can’t get behind. In the same way you should feel free to date whoever you want, if you continue to feel strongly for someone even when a relationship seems slow to move due to certain circumstances, you should feel free to soldier on with that connection, too.

There’s real pressure from friends and family to replace a match with another one just because it’s easier now—if you haven’t, it’s your fault for being “too choosy” or “not trying hard enough.” No wonder so many of us end up in so-so relationships with men who don’t give us butterflies; we settle for them just because we can.

If you’re like me and you’d rather be alone than settle for less than true love, as long as you’re not hurting anyone, go be a soldier for love. Make that dreaded first move. Fight to make that relationship happen. Wait for as long as your heart can take. And when nothing happens still, know that you did all you could. But rebel against the idea that the love you have is disposable, because you will know it if it isn’t. You don’t have to live in the 1940s without a cell phone or an Internet connection to realize it.

Me? I’ll continue to be one of those people who take ages to move on from someone they love. Whether it works out with that someone or I end up alone still, the pleasure of having been honest with myself will be worth it.