Meghan Markle just added a Welsh gold wedding band to her jewelry box after marrying Prince Harry almost a month ago. But the new Duchess of Sussex already owns quite an array of rings and bangles. While she only just gained access to the Queen's vault of jewels —her wedding tiara counted as "something borrowed"— Meghan may refrain from borrowing some of the glitzier pieces.

Her penchant for minimal, delicate pieces in warm golds puts her at odds with what her new in-laws frequently sport. In fact, you have to really zero in on photos to catch a clear glimpse of what she wore. On the other hand, the Duchess of Cambridge favors jewelry that's a little bigger than whisper-thin.

Her engagement ring is half the size of Kate's. 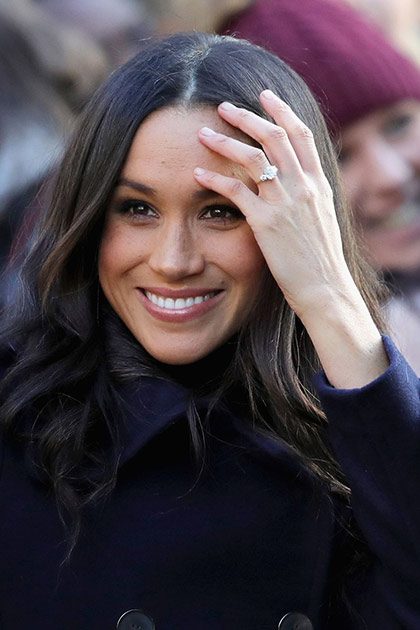 The Duchess of Cambridge, of course, received Princess Diana's sapphire cluster back in 2011, but Prince Harry designed a ring for his bride with an equal amount of sentimental value. He sourced the center stone from Botswana—where they visited early in their relationship—and the two additional diamonds came from his mother's collection.

Altogether the ring is about 6.5 carats, Time estimates. The center gem on Kate's is about 12 carats alone—not to mention the 14 other diamonds. Given their royal associations, however, experts value both pieces as "priceless."

Her go-to metal is yellow gold. 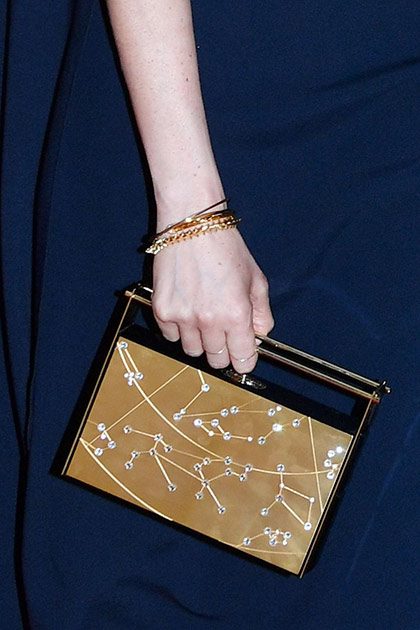 Prince Harry told BBC that he selected yellow gold for Meghan's engagement ring because it's "her favorite," and based on what his bride has worn in public recently, he's right on the money. She wore this collection of glimmering bangles at a concert for the Queen's 92nd birthday in April.

One of her most expensive pieces appeared at Christmas. 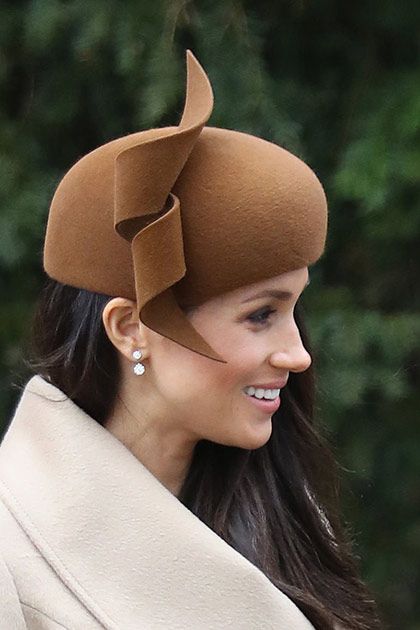 The double-diamond white gold earrings came from Birks, which is the "a Canadian store equivalent of Tiffany's," Kay says. It's the same brand that supplied the opal earrings she wore at her engagement announcement.

The trendy jacket style has the second gem suspended from the earring back instead of the front. Altogether they contain 1.39 carats of diamonds and cost approximately $7,000 (P367,955). Not a bad way to meet the entire extended royal family! 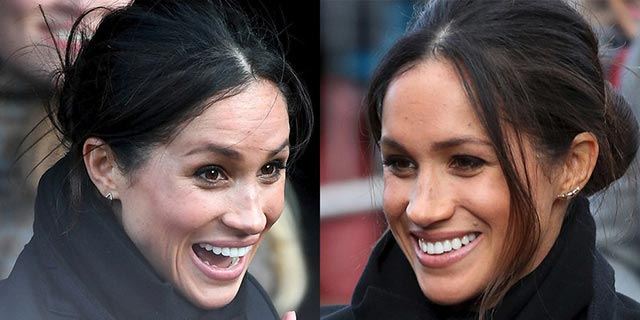 Everyone was too busy looking at Meghan's messy bun during her January 2018 visit to Cardiff Castle to notice her asymmetrical studs. On her right side she wore Zofia Day's Dash Ear Studs, while in her left ear she had Gabriela Artigas's Yellow Triple Shooting Star Earring. You can actually buy both as a single earring instead of a pair!

"It shows that she has a very down-to-earth attitude while still presenting herself with sophistication," Zofia Day founder Lisette Polnyn told People of Meghan's playful look.

She wears a thumb ring. 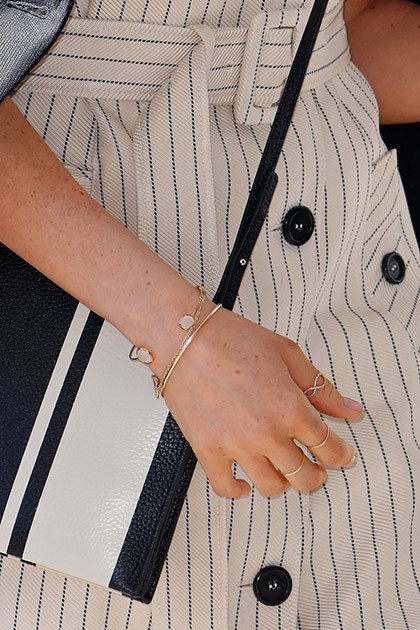 Meghan Markle shook hands with people at the Commonwealth Heads of Government Meeting in April 2018 wearing thin bands on nearly every finger, including her thumb. The move was "unusual for a British royal to do," Kay says, but she'd done it before on a trip to Scotland.

And she stacks rings on her other fingers. 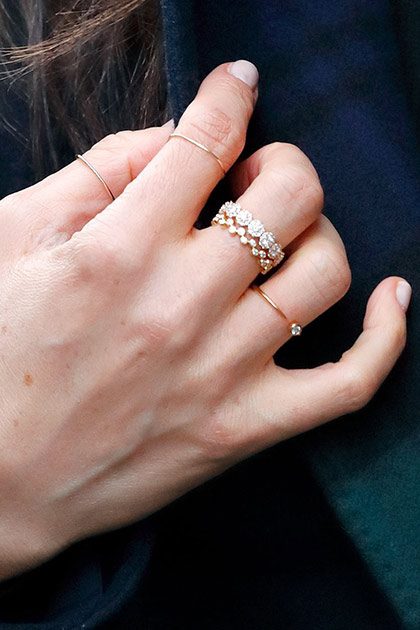 While not everyone can afford multi-carat diamonds, this is one Meghan-inspired jewelry look more people can get in on. On a visit to Scotland, she wore a $60 (P3,153.90) Missoma Interstellar Ring and an affordable $44 (P2,312.86) Catbird Threadbare Ring.

She had worn her wedding earrings before. 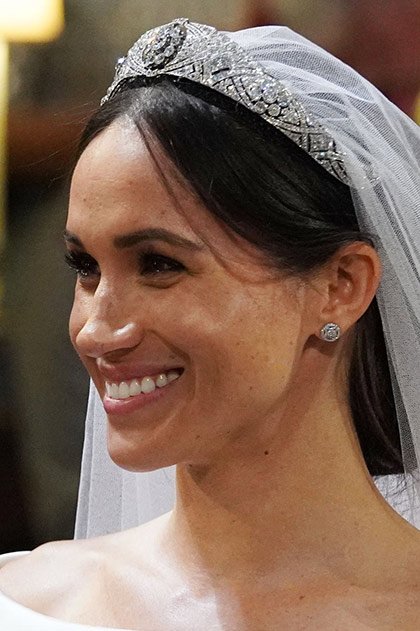 Kate Middleton wore new Robinson Pelham pendants given to her by her parents on her wedding day, but Meghan reached for a pair of Cartier studs she'd previously debuted at an Invictus Games event just the month before. According to the jeweler, the design of the collection "is a modern allegory of seduction featuring harmonious, interlacing curves that play with light and shadow." Ooh la la!

She breaks up matching sets. 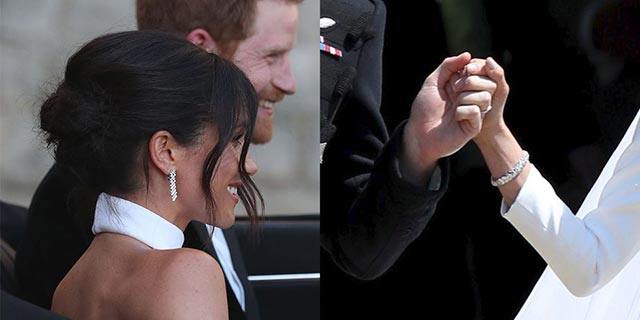 With all eyes on Queen Mary's bandeau tiara, it was easy to miss the dazzling tennis bracelet Meghan wore on her right wrist. The Cartier bangle apparently featured 104 brilliant-cut diamonds and another 52 baguette-cut diamonds totaling 5.6 carats. You can still buy one—but you'll have to cough up $155,000 (P8,147,575). Later that night, she wore a pair of earrings from the same Reflection de Cartier collection worth $68,000 (P3,574,420), plus tax, mind you.

She followed some traditions, though. 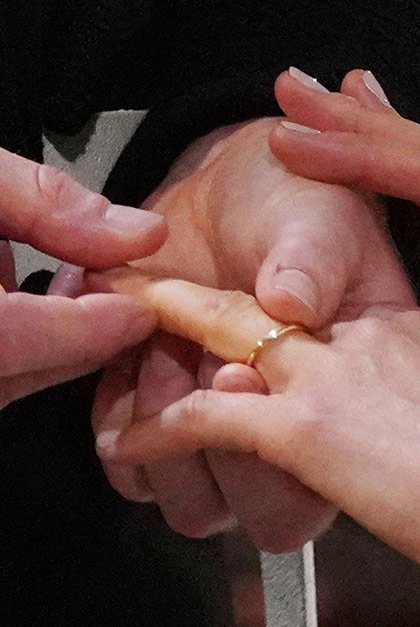 Meghan honored generations of royal brides before her by wearing a wedding ring made of extremely rare Welsh gold. The Queen Mother started the trend back in 1923, and Queen Elizabeth, Princess Margaret, Princess Anne, Diana, Princess of Wales, and the Duchess of Cambridge all received bands of the same metal.

But went right back to her signature style after the wedding. 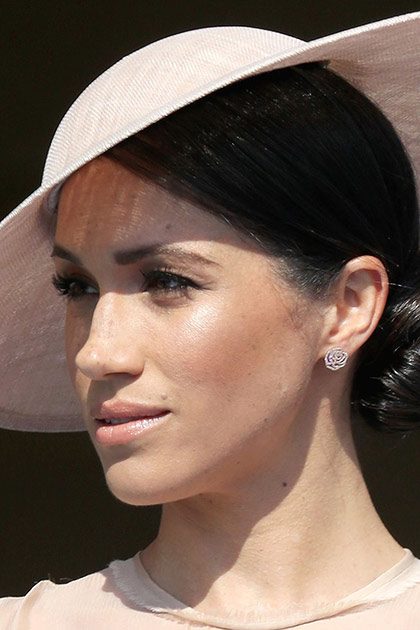 For her first appearance as a Duchess at Prince Charles' birthday celebration, Meghan wore Vanessa Tugendhaft's Idylle La Rose Earrings. The 18-karat pavé diamond studs sold out 10 minutes later, according to the designer, with the matching bracelet and necklace disappearing not long afterward. She'd previously worn the brand's Infini ring and Precious Charm necklace, but it's official: Her new royal status comes with some serious style power.